skip to main | skip to sidebar

Making an exhibition of myself

I do feel that I neglect this blog these days. I had hoped to be able to show the design and printing process but the publishers weren't too forthcoming, and so all fell a little silent. Will try again with another blog.
Meanwhile some for the work from Starlight will be on show for a month in The Cloisters Gallery, St Davids Cathedral Refectory, Pembrokeshire.
I also have work on show at The Imagine Gallery in Long Melford, England: Simply Books in Bramhall near Stockport, England and The True North Gallery in New Hamilton, Massachusetts, USA.
Posted by Jackie Morris at 3:33 AM 3 comments:

Time to get my head back into work and when I should be painting I am working on a powerpoint presentation for Starlight. Off to Simply Books in Stockport on Wednesday, Madelaine Lindley's on Thursday of next week. Simply books won Independent Bookshop of the year last week, so this is a good time to be going there. Will be in the store in the afternoon, with paintbrush and pen in hand, for signing.
It takes time to gather images and get my head back into a book, in this case far too much time. I don't really want to leave home at the moment, not just because of all the work going on here, mostly because my cat is sick, but maybe this is a good time to have a break from everything here so that I can come back and paint again. The paintbrush feels so strange in my hands after a few weeks of not painting. 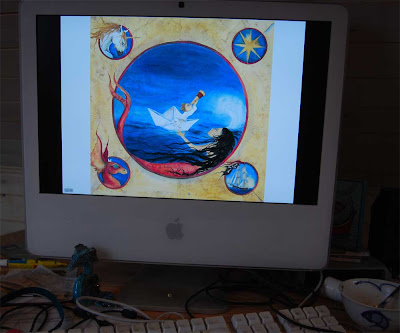 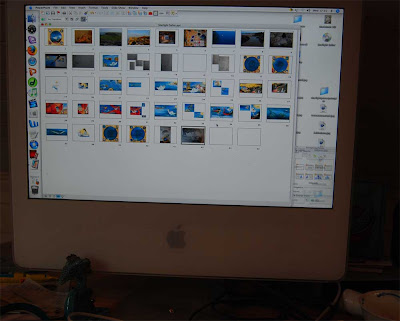 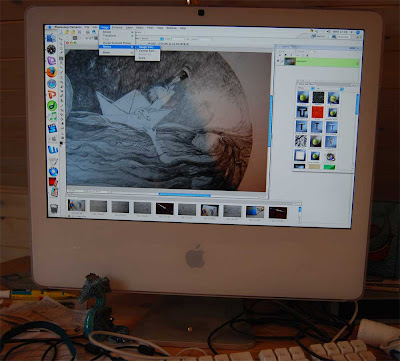 A parcel in brown paper

They arrived in the post, two copies, one US, one UK. I unpacked them carefully, nervous. The road to producing the book had been a long and not always happy one for me.
And they looked beautiful. And all the effort and strain did not show in the finished book which I hope will become a treasured favorite.
James and I have already had a review which compares his words to those of Robert Louis Stevenson and says that the book is destined to become a children's classic. How lovely. 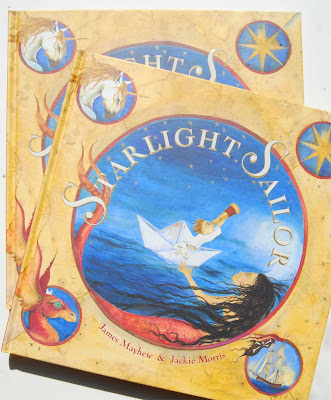 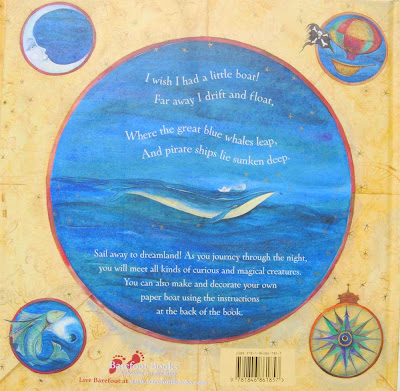 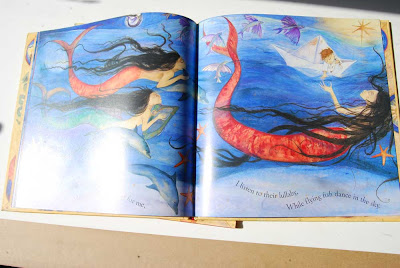 I still think of the book as Starlight Starbright.
I so look forward to working with James again, soon, on a new book.
Please let us know what you think of the book, and through the paperboat adventures blog, or through Barefoot Books website, let us hear your paper boat adventures.
Posted by Jackie Morris at 1:41 AM 17 comments:

Two days ago I had an email from Barefoot to say that advances for Starlight were in and they had sent me a copy. Each day I work on my new book. Each morning I wait for the postman, a little scared but quite excited, for the book to arrive.
Posted by Jackie Morris at 1:56 PM 3 comments:

There is little to report on Starlight Sailor at the moment. This is now a time of waiting. The work has all gone to the printers and I am hoping that it comes back looking wonderful. Meanwhile I am getting on with The Ice Bear, James is working on a new Katie book and I am very glad to say that I have finally nagged him into starting a blog. Whether he will ever forgive me remains to be seen.
As soon as a copy of Starlight Sailor arrives and I have a publication date I will post it. I think I am up in Chester or Manchester signing books in October, as well as at Cheltenham Festival, but more details of that later. In the meantime call over at James's blog and say hi. And I will start nagging him for another text.
Posted by Jackie Morris at 9:21 AM 2 comments: 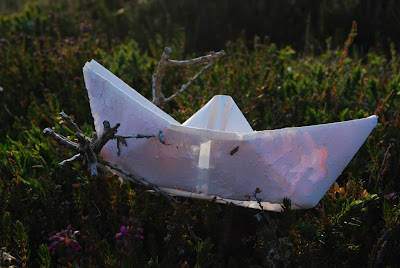 The cats and I went walking in the early evening light, over the hills and far away to sunset.
In winter, when it snowed, we took a boat out to sail on an ocean of white. Yesterday we found the boat, storm tossed in heather and lit by low sun.
It looked beautiful.
Posted by Jackie Morris at 4:11 AM 9 comments:

A white envelope on a gray day. 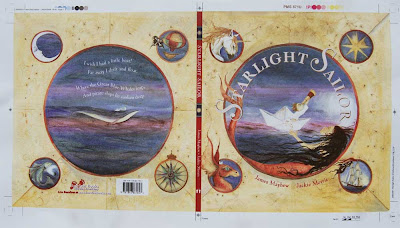 This week I received the small pre-proof print outs of Starlight, with the new cover. Was very nervous about opening them after being so disappointed with the first proofs. But they looked wonderful. And after all that the cover is just right. So pleased with them and even in this tiny version they look really good. In fact it would make a great tiny board book.
So, many thanks to James for his patience with me, and to Barefoot for turning the book around and making it shine.
It is a great shame that publication has been put back a month because of the delays. Hoping it can move forward again. Looking forward now to seeing the finished book and taking it out to children.
I have learned a lot working on this book.
Posted by Jackie Morris at 11:32 PM 12 comments:

In a small and quiet voice....

... and on even further reflection I have to say that the new cover does suit the book.

And on hearing the story of the Classic Poems book I would like to take the blog on further. Although the design process still remains a mystery to me, and I think the book has now been sent off for proofing for a second time, though I don't know where, or what paper is used or what finish the cover will have etc.........
I thought that it would be good to carry on the blog after it is published by inviting people who buy it to send in the story of their book, where they bought it, who for, where it was sent or given and to who and why, and if paper boats were made after reading, and adventures of where they were sailed to.
Not sure how to do this yet. By inviting guest bloggers? By having emails sent here and then posting them. Will think about it and would welcome advice from all and anyone up to speed with technology.
The book will have a few launches, one in Bath at the Bath Festival of Children's Books, one at Solva Woollen Mill where they now have signed copies of my books and some limited edition prints for sale.
More news about the book will follow.
Nervously waiting to view the proofs. 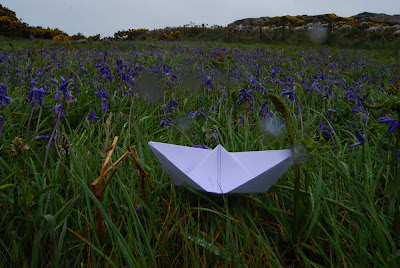 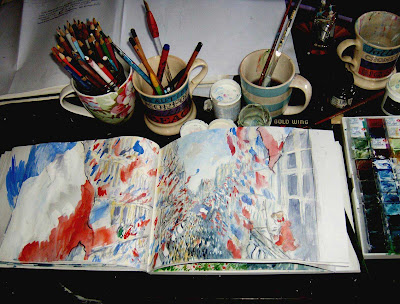 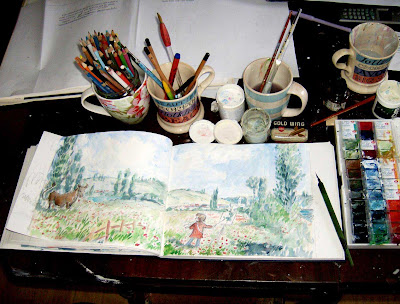 I do so love to see how other people work.
James has been working on another book for Orchard about Katie, and has been painting full colour roughs to size. So beautiful and I love all the pencils in pots too.
Just beautiful.
Posted by Jackie Morris at 4:20 AM 2 comments: 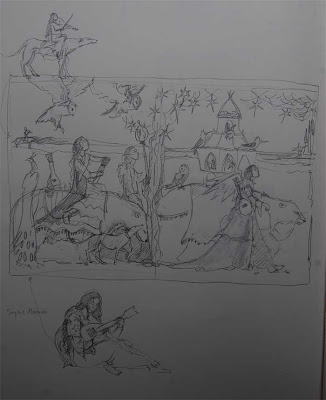 After all the fuss and bother with the cover things have now gone quiet again. The cover arrived and has been accepted (so far, but still feel quite nervous as the other two were accepted too and later rejected). I have been paid, I think, and have moved on to other work so now wait to see how the type is designed, both throughout the book and on the cover.
After a few days of recovery, during which I hung an exhibition while I should have been resting and did some owl paintings that I have waited a year to do, went for a walk with Joanna Lumley and the cats and painted in the refectory, all of which when I should have been resting, it is now time to move on to the next book, The Ice Bear, with Frances Lincoln.
I have to go to Hay Festival where I am doing a session with children and a masterclass, both of which are sold out ( but will be at Bath Festival in Sept and also Cheltenham in October).
Two roughs have been submitted to the MBF for their Christmas card and I nervously wait for their response. 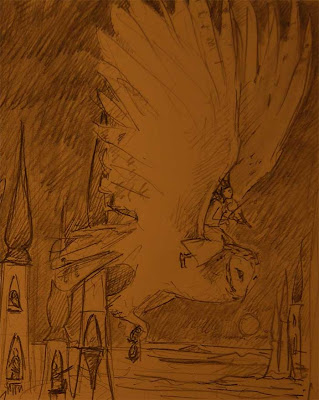 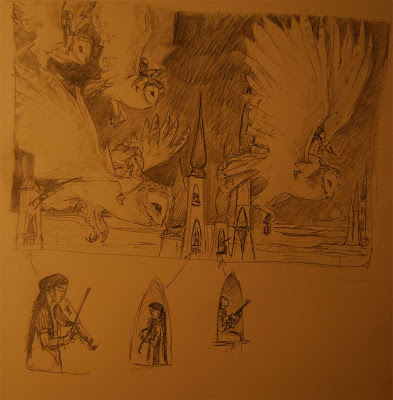 Meanwhile, today I had a chance encounter with a woman that cheered my soul. She and her husband called from the Refectory because they wanted to buy a print. I invited them up to the house, only then realizing the filth and chaos the house was in! They came and saw my prints and the studio. ( I seldom invite people in as my work place is also my home and the kids home and we like to be private.)
She told me a story about The Barefoot Book of Classic Poems. A story that made me cry but also gladdened my heart.
She had worked in a place for very difficult and troubled children in London. Among the children she knew was a five year old who had been so badly abused and traumatized by his mother that he barely spoke, couldn't read or write and was so difficult. ( People can be cruel but God alone knows what his mother went through also). He would take the Barefoot Book of Classic Poems and sit and look and look and look at the paintings and then he would tell the people caring for him all about the stories behind the pictures.
Who wouldn't cry to hear such a story.
There are many times that I have felt like giving up illustrating and just painting. Stories like this keep me tangled up tight with books. 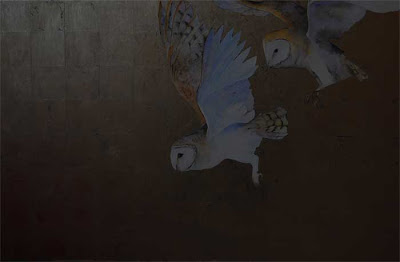 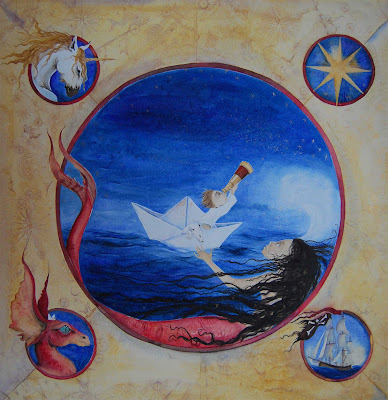 ....done.
Not sure how I feel about it. I did the best that I could. I feel stupid for listening to them last time and giving them what they had asked for, re something that was designed in photoshop and then painted by me. I should have sat down and thought about what it was that was wanted and designed the image myself. Lesson learned on that one. I do remember saying a few times that it wouldn't work, was weak etc.....
This design is better. I can see why they wanted it as it ticks all the boxes and shows what to expect from the inside pages.
For me it gives it all away in one big shout on the cover, but then that is maybe what a cover should do, and what a cover should be. After all for many people who buy on the net the cover is all and everything that they get to see.
If truth be told I still prefer the first cover but in saying that completely understand why the editor and publisher want this one. So tomorrow when it is a bit drier I will post it off to them and hope that they like it.
I need to move on to other work now. Today I have an exhibition to hang.

But I really enjoyed doing the drawing for this cover, the big rough, and now I would love to have a go at doing a whole book that is drawn rather than painted. It will be a very difficult challenge as it is so so very hard to keep the freshness of sketches and when you think they will be used for publishing so often they become tight and self conscious.

Anyway, for now I hope they like it.
Posted by Jackie Morris at 2:57 PM 15 comments: 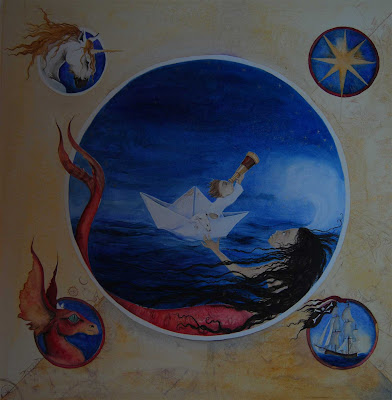 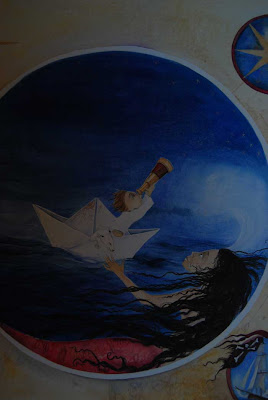 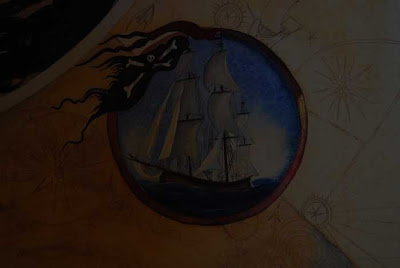 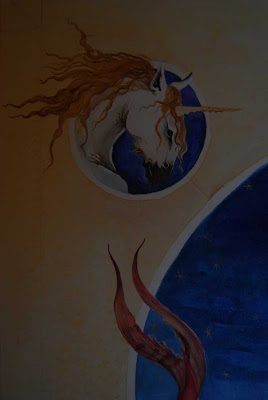 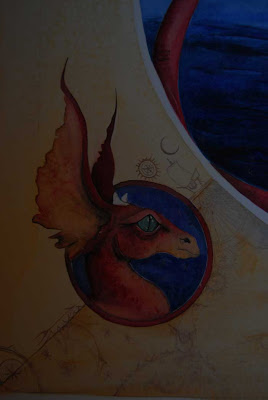 Artist by day, troll by night

Promote your Page too

Under my pillow waiting to be read is..